Aston Telling Tales is a Women & Theatre participatory heritage project that ran from January to May 2013 to uncover the untold stories of working people past and present.
Working with the Aston community, Women & Theatre researched and uncovered stories of servants who worked at Aston Hall during the seventeenth century, and recorded contemporary oral histories by interviewing those that currently live or work in the vicinity of the Hall. By focusing on these two strands of history, it was hoped participants would draw links between historical and contemporary life and connect with heritage sites such as Aston Hall.
Over the course of the research sessions, the team discovered that many people have a strong connection to Aston and the surrounding community. There are many unsung heroes that go above and beyond the call of duty and their professional remits, in order to support the community’s needs and ensure that Aston is a more united and enjoyable place to live and visit. There are also many hardworking individuals that provide invaluable services and products, all contributing to making Aston the diverse and lively place it is today, whilst working to safeguard its future.

Drama scripts were created from the research by lead artist Ali Belbin. They were performed at Aston Hall in May 2013 and also recorded as an audio drama.
The audio play is made up of eight stories and have been uploaded to our SoundCloud for your listening pleasure. Please click on the link that will take you to our SoundCloud: http://soundcloud.com/astonaudiodrama/sets/aston-telling-tales-the-audio

We hope you will enjoy our tales. Please let us know what you think.
Posted by Women and Theatre at 11:28 No comments:

We had a lovely review session with the Ageing Well group where we distributed a CD of the audio drama and certificates detailing everyone’s achievements and hard work.

All expressed their joy at being involved in such an interesting and enjoyable project and sadness that it had ended so quickly. It was agreed that it had brought the Aston community closer together and people felt a connection to Aston Hall and its rich history that they had not felt before. Those involved also felt that they had made some new and lasting friendships.
An unexpected and surprising aspect the project gave its participants was that the group gained strength from each other and became a united company, which was a joyous experience to be a part of. Many also expressed their desire to become involved in a similar project, unearthing more stories and performing at different heritage sites.
Check back soon for videos of the performances and access to the audio drama.

Posted by Women and Theatre at 14:49 No comments: 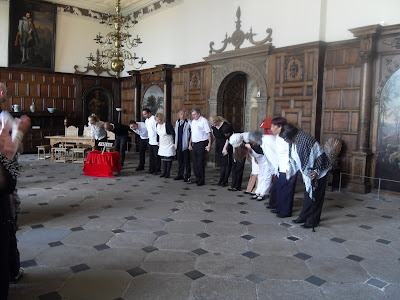 Today was the last of our performances and the end of our project. It was wonderful to meet such a fantastic group of people who all contributed to the making of Aston Telling Tales. Special thanks are extended to Alison Belbin, who made the project what is was and who tirelessly organised group activities, researched the seventeenth century in depth, interviewed members of the community, wrote the scripts, directed the cast and performed!
We had a brilliant time and hope you did too. 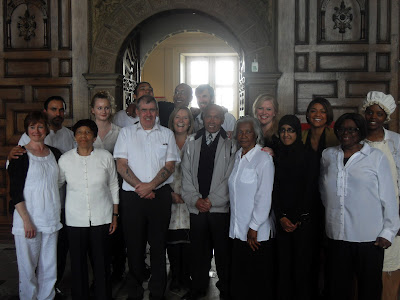 Posted by Women and Theatre at 18:56 No comments:

Cast had the opportunity to polish their performances yesterday during our dress rehearsal. There was a buzz of excitement in the air as they changed clothes and became their characters, and the run through went smoothly.
It was also a fantastic opportunity to view Aston Hall in the candle light. Though the hall at night does make for extremely cold conditions, with the last visitor gone, the hall becomes extremely still and quiet and you begin to feel extremely aware of the history, it’s almost tangible. It becomes much easier to imagine how those in previous centuries would have lived. This was a valuable experience for the cast as it helped them inhabit their roles and remember why we are creating such a project.


The first day of our promenade performances went really well. The first show drew so many audience members that Dick’s Garret was packed to the rafters. The footballer’s wife thought there must have been a sari sale on!

It was great to see actors interact with the audience as it added an extra dimension, breathing life into the characters and the hall itself. Mildred's rendition of 'Old Man River' was so heartfelt, it brought a tear to the eyes of a few.

We recieved some positive feedback from audience members who enjoyed the mix of old and new tales and thought our concept was unique.


We began in the Great Hall, with the introduction song 'Aston's Working 'and 'Elizabeth the Housekeeper's Story, 1650'. 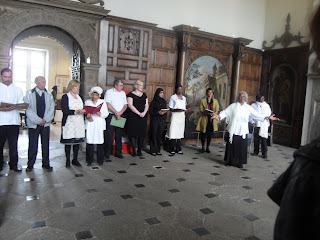 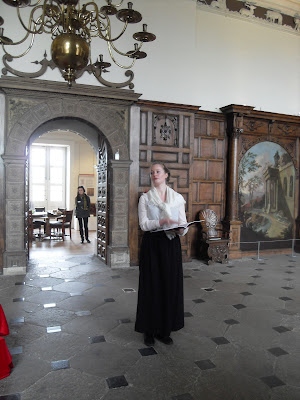 We moved upstairs to the sounds of teenage boys chanting 'Aston Villa' and filed into the Great Dining Room for 'Mike's story, 2013'. 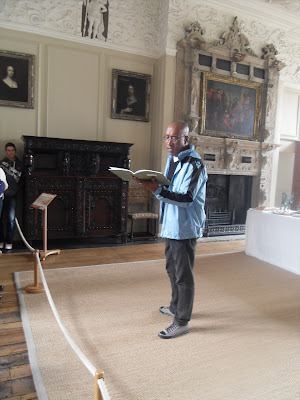 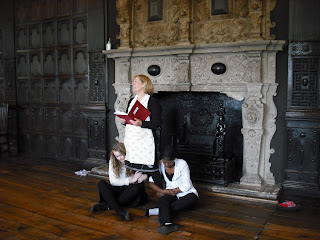 After a short walk up to the servant's quarters in the attic, the audience saw 'Henry the Farming Tenant's story, 1650'﻿ and 'Shibli's story, 2013'. 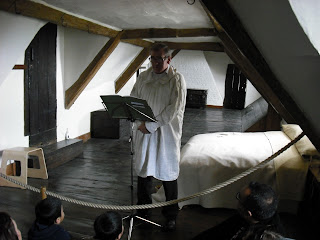 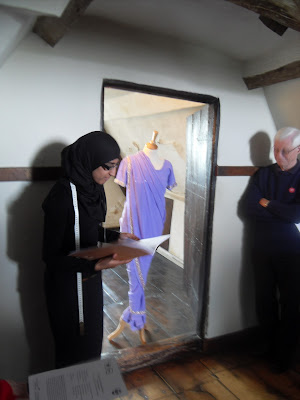 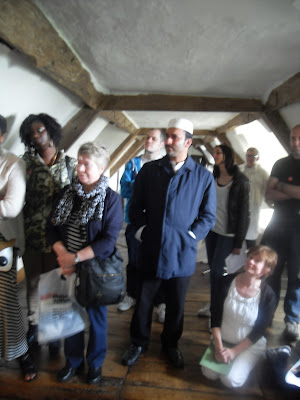 Then it was back down the stairs to the kitchen to see the 'Dairymaid's story, 1650'. 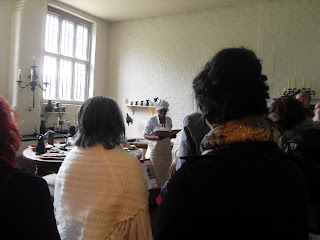 With the finale, 'Abi's story, 2013' taking place in the Great Hall, followed by a lovely rendition of 'Old Man River', sung by Mildred to close the show. 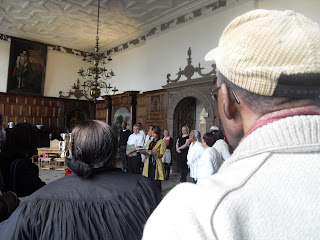 Come and join us tomorrow for a new look at Aston's working class. Two performances ﻿will be shown, one at 1pm and the other at 3pm. We are based at Aston Hall, Trinity Road, Birmingham, B6 6JD. See you there!

Posted by Women and Theatre at 17:56 No comments:

All our hard work...

Claire's display is progressing nicely! We hope you will pop by and take a look over the weekend before the performances begin and get a taste of how we brought our research to life.

...well, almost. Claire still plans to add a couple more logos and a book containing Mary Collier's 'The Woman's Labour' poem. The unveiling will take place in the shop at Aston Hall over the performance weekend (Saturday 18th and Sunday 19th May).
﻿
﻿
Posted by Women and Theatre at 19:44 No comments:

The Hopkins Day Centre kindly lent us some space for our makeshift studio.
Ali’s wonderful scripts were brought to life and participants enjoyed seeing their research and interviews brought to fruition and turned into a creative piece. Many were natural actors and had wonderful tones for audio performances.
Getting to grips with the technical aspect of recording content was also an enjoyable aspect to the week, with Louise only too happy to explain the use of sound equipment and recording devices.

The audio play will be available online soon. Check back for more details.

Posted by Women and Theatre at 19:44 No comments:

We had a wonderful evening, casting for our performances in the sunshine at Aston Hall. 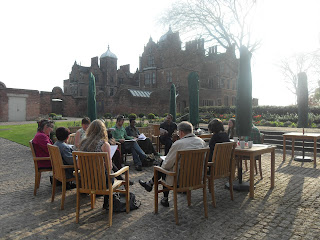 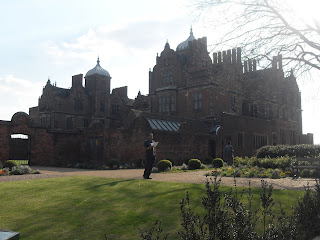 Posted by Women and Theatre at 19:43 No comments:

The first activity invited participants to match pictures of seventeenth century domestic chores to their modern day equivalent. We discovered:


*        Bleaching fields were enclosed areas outdoors where sheets and linens would be left to naturally dry and bleach in the sun. 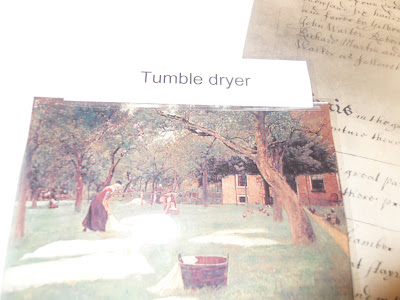 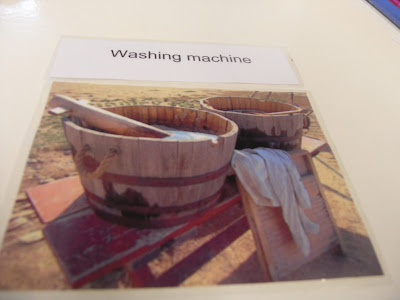 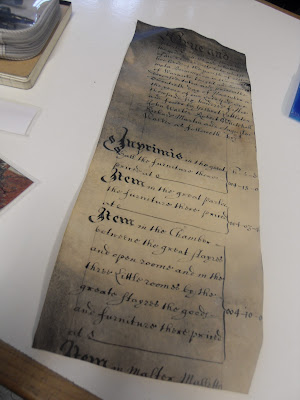 After Sir Thomas Holte’s death an inventory was taken of all the items in his household and valued at one thousand and sixty one pounds. This was not as much as would have been expected from a grand estate, however Aston Hall had been ransacked after the Civil War.


Servants in Sir Thomas Holte’s will (1637) provided from Rosie’s research
Sir Thomas Holte requests that his heir, George Holte “keep his sister Elizabeth Holte, my daughter, with convenient diet and lodging both for her and her woman, until Elizabeth is married.”
He requests that his funeral is “without worldly pomp but rather with charitable distribution to the poor with bestowing of blackes upon my children and serving men.”
To Mrs Anne Pennant, servant “in consideration of the good service that she hath heretofore done and performed not only to my wife, now deceased, in her lifetime, but also since then unto me…various plots of land.”
Sir Thomas Holte requested his executors raise enough money to build “one convenient Almshouse or hospital of brickworks in the town of Aston for the habitation of ten poor persons, whereof five shall be men and the other five shall be women.” He also left them two shillings a week, money for a new gown every year, a cart of coal every year, and money for sermons from a preacher.
He set aside money for making gardens, orchards, and bleaching grounds.
“I give and bequeath to every one of my household servants…that have dwelt with me for the space of four years at the time of my death one whole years wages; every one of my household servants…that have dwelt with me by the space of two years, one half year’s wages; and if any household servant dwelling with me who has served me for no wages, the trustee should decide how much to give them.” Every servant was also to be given meat, drink and lodgings for three months after he died.
Other servants named in his will:
Edward Mercer, clerk (chaplain): £10
Thomas Birch: £10
Richard Walter (steward): £10


Research was also conducted into other household items used during the seventeenth century. We discovered several interesting items:

The next activity saw the group split into two teams: the rich and the poor. Rosie held up cards with images of different food items and asked the group to decide which group ate which food.


Ali then recapped some of the information Dr Chris Upton had discussed within his lecture, heard by the group on Inspiration Day. This would make the next activity easier and allow participants to develop some useful questions for interviewing a farming tenant character. The main points about Aston Hall and the Holte estate were:
*        The Holtes had five to six acres of land, however the land wouldn’t all be together, but spread put across Aston.
*        There was a wood settlement in the village
*        The farming tenant would work typically work four days on his land and then two days for the estate owner, in this case Sir Thomas Holte.
Les took on the role of Henry the farming tenant and was interviewed by the group. Henry details the type of work conducted on a seventeenth century family run farm. He rents his land from Sir Thomas Holte and pays his rent in service by working two days a week on Sir Thomas’s land. You can listen to the interview on our SoundCloud, simply click on the recording name: Les as Henry the farming tenant.
Posted by Women and Theatre at 15:06 No comments: